As a player in the 1990s and 2000s, former Norwich City, Charlton Athletic, Leeds United, Middlesbrough and Manchester City defender Danny Mills kept it simple and was a firm fan favourite because of his no-nonsense approach to the game, clattering into tackles, bossing aerial challenges and making sure anyone that came down his channel knew they’d be in a battle. Competing head-to-head against superstars such as Andriy Shevchenko, Ronaldinho, Ryan Giggs, Raul, Figo, Rivaldo, Cristiano Ronaldo and the original Ronaldo – ‘O Fenômeno’ – tested Mills’ ability but not many consistently got the better of him.

‘I’ve been incredibly lucky, I’ve covered four World Cups, including the final in Brazil in 2014 and the semi-final when Germany beat Spain 7-1, as well as European Championships and several Champions League Finals. It gives me great flexibility to do other things too,’ he adds.

A runner-up in Celebrity Mastermind back in 2012, he has also raised tens of thousands of pounds for the charity Shine, whom he is a Patron of, after his son Archie tragically passed away from spina bifida and hydrocephalus shortly after Danny returned from representing his country at the 2002 World Cup in South Korea and Japan. 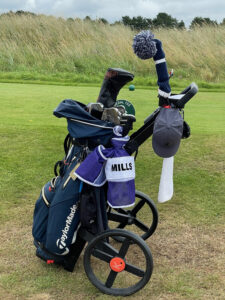 Away from media work, Danny has reignited his passion and enthusiasm for golf, a sport he first tried his hand at as a kid and uses the Kaddey Switch trolley that offers golfers a unique opportunity to move between pushing or pulling depending on the terrain.

‘I love just how simple it is to use, no hassle and away you go. It looks great too. I’m a bit of a nomadic golfer and more than happy to drive the length and breadth of the country for a good game on a nice course, and because the bag stays attached to the Switch it makes it very convenient. I’d love to be in a dream fourball with Tiger Woods, Vinnie Jones and Tom Hanks, that would be off the charts. And it would have to be at Pebble Beach.

‘When I was a kid, there was a group of about eight of us and we only had one club, a bent nine-iron with a leather handle that we’d share – we used to hack around in a field at the back of our house!’

‘And then I got into a bit when I was older, I played in a few football charity days, but never really took it too seriously, never had lessons for instance, and just got away with being an athletic sportsman who could hit it a good distance – although not always in the right direction! In those team events, playing off a handicap of 24 or so back then, I might be good for a par or a birdie here and there, as well as lots of 10s and the odd lost ball of course, but you’d have a laugh.

‘When I retired from football I was – and still am – doing lots of media work so I just didn’t have the time to take it too seriously, and then about three years ago I thought “let’s have a go at this”, let’s do it properly, let’s have a couple of lessons and get a bit of a setup sorted, get some better clubs and start to enjoy the game and it’s gone from there. About a year ago I set myself the challenge of getting down to a single figure handicap and I’m getting there.

‘(Former Leeds team-mate) Lee Sharpe, who’s now playing on the Seniors circuit, recommended this coach to me, Marcus Bell – the Zen Golf Mechanic – and he was superb, he ripped up what I’d learnt previously and simplified everything, which I could tap into. He explained that golf is fluid, just like every other sport, a one-piece movement and with my sporting background it absolutely resonated. He moved me from hitting fades to controlled, baby draws and although there’s a lot more to be done, I’m much more consistent,’ says Danny, who admits to suffering from first-tee nerves just like the rest of us, despite his stellar footballing career watched by millions around the world.

‘You can’t compare it to playing in front of 80,000 people in a football stadium, because that’s what I’d done all of my career and what I was sort of good at. Golf is completely different, and things can go wrong very quickly. You get on that first tee at a pro-am and there’s probably 200 people watching, in that classic V-shape around the tee box and I’m thinking “if I shank this, I could kill someone. This is not good for me”. And then they announce your name onto the tee, there’s the applause and you think “please just wait to see where this goes before you start clapping,” adds the 19-cap international who was one of the key players in David O’Leary’s superb Leeds United team that reached a Champions League semi-final in 2001 but succumbed over the two legs to a supremely talented Valencia side.

‘We were close to winning something, but we weren’t quite good enough to win the Champions League, the UEFA Cup the following season or the Premier League, but we definitely punched above our weight. We were the perfect jigsaw, all the parts just fitted together. Of that side, It’s only really Rio Ferdinand who left and went on to do better things I would say. For everyone else – certainly at club level – what we achieved at Leeds was the pinnacle. We were young, energetic, hungry – it was the ride of our lives, really, and we just enjoyed it.’

While that Champions League campaign was the highlight for Danny in his club career, playing on the international stage was his Everest. ‘When I signed apprentice forms at Norwich City when I was 16 years old, never in my wildest dreams did I think I would be good enough to play for England. So, to make it to play for my country, and to represent England in a World Cup, that is beyond all expectations I’d ever had. I watched Euro ‘88, that great Dutch team that everyone enjoyed with Marco Van Basten, Ruud Gullit, Ronald Koeman, and then of course came Italia ’90 with Paul Gascoigne, Toto Schillaci and all to the background sound of the magnificent Nessun Dorma – it was captivating. 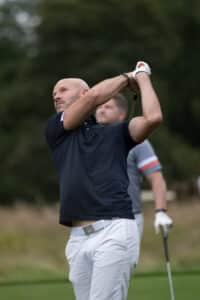 ‘But I never dreamed of making it at that level, especially as I’d never played age group categories for England. I never had the greatest technical ability, naturally. First touch, passing, they were not my forte and I had to work at them. I was a very good defender, I was incredibly hard-working, and I could take instruction well – if I was told to stop an opposition player, that was my job, and I’d stop him. I knew my strengths and I played to them, although there were always players who were ahead of me in terms of technique. But I worked harder than them, I improved my areas of strength, and worked hard on my weaknesses to not only be the best I could be, but also probably better than I ever imagined I could be. I knew my limitations. I’m under no illusions, I played at the World Cup because Gary Neville was injured – but everybody needs a chance, an opportunity and I like to think I took it on the global stage and didn’t let anyone down. It more than ticked a few boxes and showed that I could compete against the very best.’

As the conversation draws to an end, Danny reiterates his passion for doing everything to the best of his ability.

‘I don’t do anything half-hearted. If I decide to do something properly, I’m all in, and that’s across my whole life, whether it be cooking, football, golf or punditry. I listen to Jake Humphrey’s ‘High Performance Podcast’ and it’s brilliant, and the one message that comes across – whatever the individual is involved in – is relentlessness and resilience. I was always brought up with desire, determination and dedication. Well, that’s not too far away from relentlessness and resilience. And if you look at nearly everyone who’s been successful, sport, business, medicine, you have the determination to push through the tough times and keep going to be the absolute best you can be. I’ve worked with a lot of disabled athletes, and the challenges they are faced with – both to be great in their sport, and indeed in their life, they show that if you’ve got the desire and the heart, there aren’t too many limitations in life. Of course, you need a bit of luck, and sometimes being in the right place at the right time, but if you pursue something relentlessly in the right way, you have a great opportunity of fulfilling your dreams,’ he concludes.